Today we embarked on a huge and momentous occasion in my oldest son's life. He's five. What isn't exciting at that age?
Nick was happily scarfing down his chicken at dinner, I glanced in his direction and noticed something bizarre- a huge gap....a huge nothingness in his mouth.
"Nick, look up at me baby", I asked.
Happily he looked up and smiled. It was gone- his first tooth. 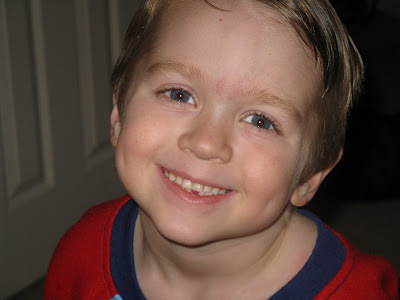 I asked him where his tooth went. Of course he had no idea. Dumbfounded, Nick looked at me like I was from Mars. Just then, Rick blurted out that the tooth would inevitably be in Nick's poop. I wondered if Nick would actually be excited about that. No. He crinkled up his nose and mumbled, "Eeew".
Glancing toward one another, Rick and I communicated without words. No one was going to be searching for the tooth. It wasn't going to be me. And, I guess Rick wasn't crazy about the poopy tooth-searching either. Hmph. That's the least he could do! He IS the father. Why do I always have to do the dirty work? Motherhood is for the birds! I figure that job is surely found on the Duties For Fathers list, like taking out the trash and hanging Christmas lights.
We all finally agreed that the tooth is lost....forever.
I told Nick that after dinner I would have to call the Tooth Fairy, explain the circumstances, and surely she would still visit him tonight. He smiled and I made the call. Turns out, the Tooth Fairy was much obliged. I figure it was probably no sweat off of her back...it is not her money going under his pillow anyway. What is the going rate for teeth now-a-days? I was thinking about $1 but I read on another blog that $10 is more like it. Seriously?! Darned inflation! I don't think so. Nick will be getting $1. We're not stinkin' millionaires here! At five, he really doesn't need it anyway.

One dollar. Preferably folding cash. I don't know anyone who gives ten dollars!!