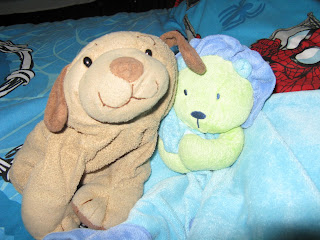 Nicholas is a humper. When I say a "humper" I mean, a HUMPER. Nick pumps his poor little stuffed puppy until beads of sweat are forming on his upper lip and on his back. He routinely removes his jammies because he just gets so hot.

About two years ago, I noticed that at nap time and at bedtime Nicholas, then aged two, had started to hump his "me me" (his blanket) and/or his puppy (stuffed dog). He would actively go at it for sometimes up to a half hour before happily falling asleep. It is like he uses it to relax or wind down. Sweating, pumping, flutter kicking, with a look of pure satisfaction on his face. Initially I was a little concerned. Is this normal? Is he just so horny that he can't stand it? (Sorry, I can't think of a better word) What the heck?! He must have testosterone levels through the roof!

Then I did a little research and read that it is considered perfectly normal. Well, I was glad to hear that but seriously, when does this stop? Now, two years later he continues to do it. Also, several months ago, my husband and I decided to move our two boys into the same room. Now, Jacob watches his brother humping. Weird. It gives me the creeps to think of Jacob watching it all. Blaaaagghh!

My husband knows about Nick's humping; we have had many brief conversations about it. I always end up thinking that my husband and I will have to watch Nick like a hawk when he gets to be a teenager; after all, look at him at age four. God help me!