A few months back, while I was trying to catch up on some much needed sleep, Nicholas was feverishly writing on himself in his room. He was creating a masterpiece like no other. Black dry erase marker was scribbled all over the place: his forehead, his belly, his arms, his legs, even his back-how did he manage that? He was also writing on several random toys around in his room, really making them "look better" according to him.

So, a few moments later, when Nicholas came standing in front of me, I was so very proud. As my eyes cracked open, there in front of me was Nicholas' bright smile and an example of his beautiful artwork. 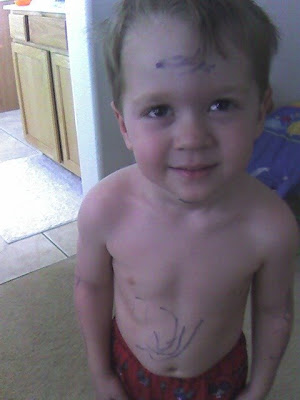 After some interrogation I discovered that Nicholas wanted some tattoos to be more "like Daddy". Since my husband has around forty tattoos, I should probably consider myself lucky
that it was only dry erase marker-one day it may be the real thing.

He's super cute, and that picture was super cute. I hope you hide the permanent markers.

Very cute and very funny... thank goodness it wasn't permanent marker...my kid had a red heart on her check for a week!!!
God bless
Kelly