A Boy Named Nick And His Bike

After my very rough Thursday, I was just plain exhausted. I really needed to relax, take it easy and remind myself that I need to allow fun in my life and not take things so seriously. One of these days my head is going to pop off of my neck!
For me, someone who always blows every ailment or would-be-injury out of proportion, I really have a difficult time just chilling out. So, I have decided that maybe I need to take up drinking. Just kidding. Kind of. Maybe a glass of wine at the end of some evenings would do me some good. That, combined with some old-fashioned sleep would probably do wonders. So, I am working on that. I think we have about ten bottles of wine gathering dust on the wine rack anyway. Woohoo! 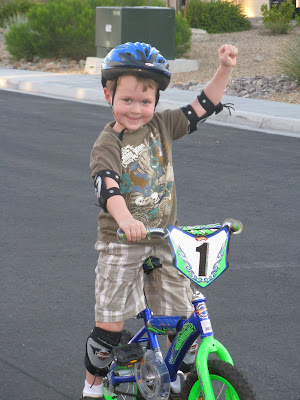 What I did not expect is that my oldest little boy, Nicholas (now 4), would decide to take me up on my offer to teach him to ride his bike without training wheels. So, on Friday night, after a few attempts in previous weeks, he had built his courage once again. As we walked outside, I was psyched. I knew Nick was quite capable. He is a daredevil and a go-getter type. He is very physical and enjoys just about every sport. There was no doubt in my mind that NICK was the only thing holding him back from his success. After a few moments of calming some last-minute jitters, Nick decided that he would be better off wearing elbow and knee pads. Done. Nothing wrong with being safe.
I held him up, gave him some brief instruction on the how-to's of taking off and stopping...and off he went. No wobbles. No crashes. No...nothing. I was a little surprised that he didn't do the typical "crash and burn". 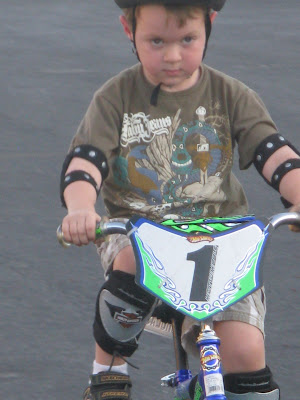 I have to confess that when Nick asked to wear the knee and elbow pads I happily agreed and would have ran inside to get them myself if I wasn't tending to Jacob at that moment. It seems silly to admit, but I wanted to cushion Nick's fall in any way possible. I wanted to protect him--but really, I couldn't. He HAD to do this on his own, without my maternal refuge. I know that bike riding is only the tip of this HUGE iceberg; there will be thousands of things that he will need to learn on his own-without me. I am so happy...and yet so sad that my little boy is growing up. 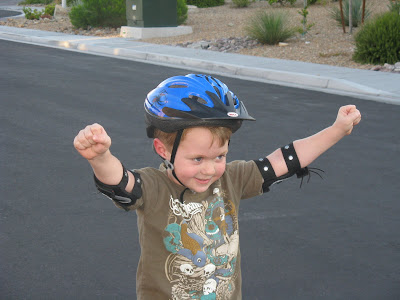 Part of Nick's motivation for learning to ride without training wheels was a promise that Rick and I made: a bigger big-boy bike. We stuck to our guns and did not purchase a bigger bike although both of us have been wanting to. Nick was beginning to look like a Shriner riding a tiny bike in a parade. 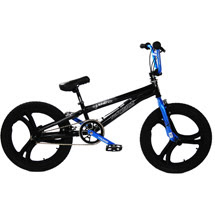 I will post a picture of the new bike soon enough. We are pricing out a really cool Tony Hawk bike. Probably $50 more just because it's Tony Hawk. Oh well. It's cool....and so is Nick! :)

"A boy named Nick and his bike" brought back memories. I fully remember fifty-one years ago (I was four) riding my bike without training wheels for the first time. My mother and father were on the front porch watching. As they hugged each other and kissed rejoicing that their baby had mastered a child's milestone, I crashed and knocked out one of my front teeth. Thanks for the memory.