Yesterday, bright and early my two sons came running into my room to wake me up. It seems that no one can sleep past the time when the sun just starts to peek over the horizon. It has been so since Nicholas was born, now Jacob also does it and they are quickly trying to train Lyla to do the same. With no care in the world at 6:30 AM they run around, stomping with each step, screaming wildly, pretending to chop each other's legs off with swords. Nice visual huh? Well, what do you expect? They are boys.

Sir Nicholas and Sir Jacob (refusing to dress for the job) 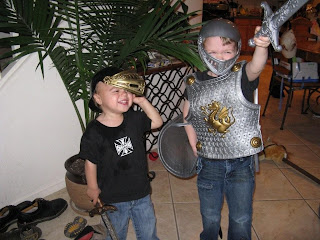 Well, what made yesterday's morning events different than any other morning was that when I dragged my bum out of bed and went into their room to open their blinds, Nick, Jacob and I stood in amazement peering out the window. As the blinds slowly opened, there in the backyard of the home behind us was a man peeing.

Now, I know it is his backyard. But really, you should have heard me trying to explain that one.

"Mommy, what is that man doing?"

"Uh, Nicholas, he looks like he had to go potty."


Sheew! The more I can make that man's actions seem inappropriate, the less likely that my children will decide to try it out. I continue to wonder why the man just could not have made it to the bathroom. What, is he a two year old?

Then, I remembered the first week that I moved to Las Vegas. I was sitting in my car at a red light, pulling out of the YMCA parking lot where I had taken the children to play at the park. Across the street was an apartment complex. Up in the window of the apartment overlooking the stoplight was a man, naked in the window, playing with himself. What a sicko. I sat with my jaw hanging on the ground. At least I did not have to explain that to the children.