Well, Hello All!
We are back from our trip to Disneyland and it was really a fun time. It was all that Disney could have been...without spending a total fortune. We stayed at a hotel on Disney property that was pretty average-but nice. The hotel was not flashy, but it is exactly what I wanted. I was not into spending our extra money on a room that I knew would only serve as sleeping quarters. We were only in the room overnight and for naps midday. Then, I felt we could spend our money on all the fun stuff: food, souvenirs, and Disney paraphernalia. 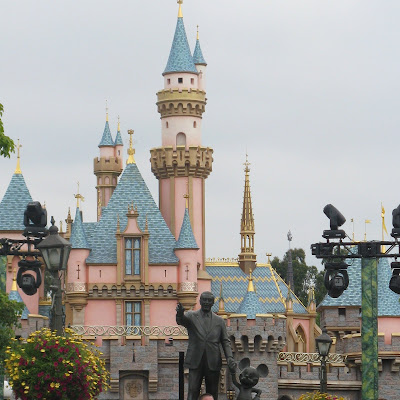 I guess we suffered the typical trip with young children things: having to stop every hour to hour and a half to give the children a break from the car, over-tired, over-stimulated boys having two-yr old moments, and I can't forget to mention Rick and I- who, exhausted, fell on the bed nightly trying to remind ourselves that vacations are for relaxation. Then, trying to settle down our two little boys who are not used to sleeping in the same bed and who were enjoying every moment of kicking, tickling, and rolling over into one another proved to be a bit difficult. Luckily, both my husband and I were mentally prepared and didn't let much bother us. 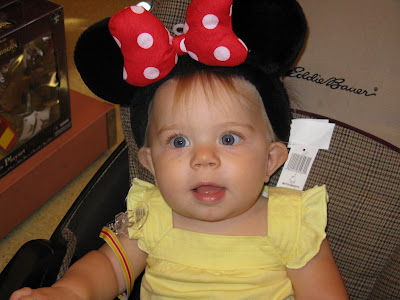 Lyla was a trooper. She rode around in her stroller, taking in the sites and having a party of her own. She also really loved the rides-at least the ones that she could go on. We all shot some bad guys on the Buzz Lightyear ride; and, the Pirates of the Carribean ride was a favorite with all of us. Of course, we couldn't miss the It's A Small World boat ride. 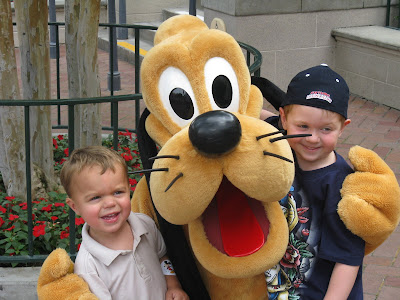 The boys both rode their first roller coaster- one that was in the children's section of the park called Mickey's Toontown. Surprisingly, no one got scared. I watched adults getting off of the ride saying that they thought that ride was more frightening than some of the bigger adult rides. I guess Nick and Jacob were proving that they are indeed "big boys".

The best part of our trip was getting to see the magic of Disney through our children's eyes. It is fun enough through ours- but through their eyes, it was definitely the cherry on top of our sundae.

Wasn't it both exhausting and fun to go to Disney with kids? I took my kids the first week of June and we had a blast. It was fun going on the rides with them -- watching their giddy nervousness and then to watch their faces. Too fun!

Sounds like a fun trip. Your little girl is SO cute! I can't wait to take our boys there - as you say the real fun is seeing the delight in their eyes.