This is a photo of me.....according to Nicholas. He created this likeness of myself recently, then happily danced around the room saying that it was me. He was so proud of his creation. I gasped and told him how beautiful she is while I tried to search out positive physical attributes of his mommy-looking masterpiece. 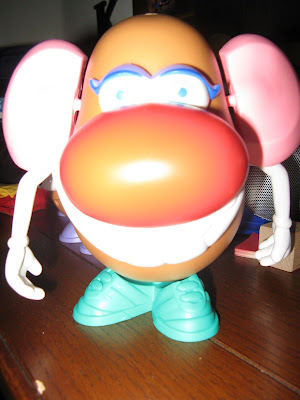 Nick was thrilled with my approval as I continued to gush over the similarities between Mrs. Potato Head and I. "She has very pretty eyes and a great smile! Do you really think she looks like me?"

"YES!", he giggled and ran into his bedroom. "MOM, let's put it on my dresser so Jacob doesn't mess it up." I did so, and she has not moved from her perch since.

I tried to hide the thoughts that were really going through my head about the similarities.

I have always thought of myself as rather pear shaped....not potato shaped. But, yeah, I have to agree that the overall shape of pears and Mr. Potato Heads is downright identical. The Mrs. Potato Head nose-a bit red and large, and the ears...well, definitely not mine. I also have much better hair. Especially now that I just had it done. 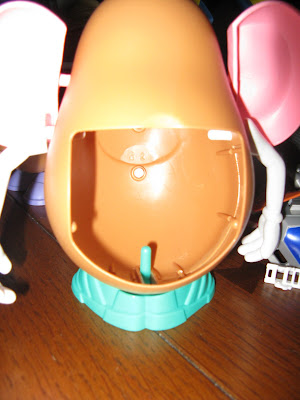 Perhaps, the most flattering part of Nick's Mrs. Potato Head Me was that she did NOT have a big bum. Woohoo! Thanks Nick!

Haha! Cute. I dread to think what mine would look like.