Discipline for Nick- A Strong-Willed Child

For three days Nick has flat-out refused to listen. He has done things deliberately, even though he knows what he is doing is wrong. In an attempt to get my attention when I was on the phone, he licked my arm. Yes, you heard it folks...he licked me. I seriously have no idea where that came from. We don't lick each other (just in case any of you are reading this and now wondering). Nick also has pulled on the Ethernet cord of our desktop computer numerous, numerous times- all of which I told him to stop. Yesterday he pulled on it and the box for the wireless Internet tumbled off of the desk to the floor. I was quite angry, so I told him that he needed to leave the computer area and go play elsewhere. He did and I really thought the issue was over. 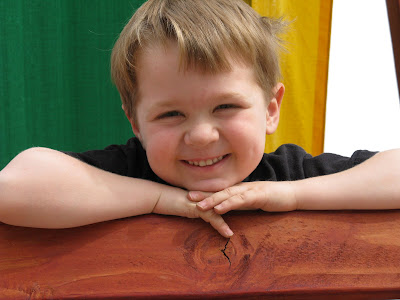 Later that day, I noticed our computer having some issues connecting to the Internet. I fooled around with a some things: turned a few things off and on and checked all of the plugs...no change. Then, when my husband came home he asked me angrily why I had plugged both ends of the Ethernet cord into the box. "I didn't", I replied, confused. Why the hell would I do that? He retorted, "Whatever! I know you did, because I didn't." See what I have to deal with? "OK, I KNOW I didn't do it. I am not crazy here and I am not lying. SO, if I didn't do it, and you didn't do it.....(thoughts are going through my head and I remember Nicholas being upset when he knocked over the box)...NICK probably did it".

After confirming my suspicions, I reiterated to Nicholas that he is under no circumstances to touch that box or those wires. Again, I was thinking the issue was over. Now, this morning I had to speak with him yet again about playing with the wires. Nick has also been trying to scare Jacob by growling in his face and chasing him. I have also told him "NO!" about this several times, but he has continued. He has even been sent to his "Bad Boy Seat" with no success. These are only a couple of Nick's antics over the last few days, there are many more; but, I do not have the patience to type about all of them. Besides, I think you get the picture. 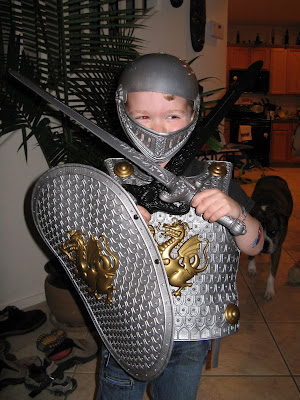 I know exactly what I have done wrong here. With Nicholas, I cannot give him an inch of leeway. He will always take a mile. He is the type child that always pushes the envelope. If there is something he can do, he will do it. It is the way he is, the way his personality is. From the first day he could stand, he was trying to stand on top of the seat on his rocking motorcycle. He is wild; he is a warrior....he is what people refer to as "strong-willed". So, I have to discipline him in a different way. I must be very constant, even somewhat rigid. No swaying. No, "Well....OK"s. Nicholas has a very strong personality. It is for his own comfort that I must be stronger. A strong-willed child without strong boundaries will always be insecure. I have read a couple of books that have backed the exact things that I am stating here now. Please read them is you are dealing with similar issues.

"Setting Limits With Your Strong-Willed Child", by Robert J. MacKenzie, ED.D.
"Raising Children Without Going Insane", by Jane Evans. <---I really love this one.

When Nick first did a few of these antics, I did not drop everything and make him go sit in his bad boy chair. I gave him a warning- an opportunity to make it right. I know this sounds fine....but for Nick, it is not. With Nicholas, if you know that he already knows better....he does not get the warning, only the punishment.

By giving repetitive warnings, I allow myself to get emotionally wrapped up because after correcting him so many times, I get angry and frustrated. Wrong move. The issue needs to be addressed very early on, preferably right that moment.

When I no longer provide Nick with the warnings and jump straight to the consequences for his wrong-doings a miraculous thing happens- he really straightens up. This is discipline the way Nicholas needs. Sometimes, when my husband sees me practicing this routine, he thinks I am being a little too rigid. But, I tell you other mothers, when I use this method, it does not fail. I once read that "Discipline is not what you do TO your children, it is what you do FOR your children". I do this FOR Nicholas. He responds positively every time.

SO, now we are left to get out the big guns. OK-not BIG GUNS literally. But the term "get out the big guns"- getting out the punishments that are reserved for the biggest of misbehaviors. A few nights without his nightly 30 minute movie time and he will be back to being my well-behaved angel. I figure his angelic behavior should last about 10 hours. That's right about the time he will be waking up tomorrow.