What Kind of Barbie Am I?

I just took a little quiz on Facebook called "What Barbie Doll Are You?". First, let me say that these quizzes are something that people with some extra time to waste often do to pass time or be entertained. Well, I was in a wanting-to-be-entertained mood earlier so I decided to take this quiz. The quiz was a series of questions and the quiz-taker chooses which answer, A, B, C, or D best describes them. I tried to answer the questions honestly, though a few of the questions failed to provide an answer that really described me.

These are my results.

Crystall took the What Barbie Doll are you? quiz and the result is Trailer-Park Barbie
you have split ends, 3 kids, you smoke too much and drink cheap beer. you've never been out of the country, except maybe to canada for the weekend with your high-school girlfriends. you know the words to every bon jovi song. you still play cassette tapes on your old boom-box. you married your high-school boyfriend, whom you divorced after he ran off with "candy" - the stripper from the next town. there's a bright side, though...you still wear a size 2, one of the benefits from smoking too much and other, um, life habits. when drunk, you either fight or f*k, and the later has gotten you thrown in jail, so watch out - slow down on the booze and try to lay off the camels while you're pregnant with number 4. 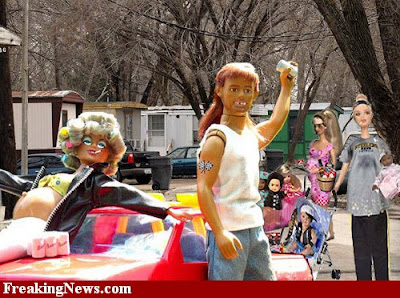 I posted my results on my Facebook page and received a ton of comments.

"HONNNEEYYY, bring me a beer and my cigarettes! I asked the neighbor to get me some earlier 'cause the disability check came in. Ya know he's got a car right? Must be nice! He came back with MGD. What?! Does he think we're rich or somethin'?

That's hilarious. I was Fries Cook Barbie - whatever that is!