Moms Are Important, Too

Today was a new day, the sun was shining and I was ready- ready to tackle my latest obstacle: incorporating exercise into my day, consistently. Exercise pared with healthier eating habits will hopefully lead me on the road to a happier me.

As a mother, I catch myself being so concerned over everyone else's health and well-being, that I often overlook my own personal needs and desires. At times it feels like I am invisible, not to my husband, thankfully, but to myself. I know this is something that many moms deal with, I am really no exception. The difference perhaps between others and myself is that I am attempting to change. In taking better care of myself, and making sure that I am not left out of the list of important people in my life, I can better take care of my children and be a better wife to my husband. Don't get me wrong here, I get so much satisfaction from my children and my husband; but, for me, really being happy means that I am also happy with myself.

I have already been moderating my diet for several days. I am on the right track; but alone, dieting does me little good. I know from experience, that exercise AND diet need to both be part of a real effort for a healthier lifestyle.

This morning after my small breakfast, I ran upstairs to get ready for my workout. By the way, the breakfast was not small because I had planned it as such. The reason was really that Jacob, the biggest piggy in our house, moved on to my plate after he cleared his. My two Eggo Nutragrain blueberry waffles became one and my large green apple was greedily snatched from my grasp before I was even halfway finished. Now, we do have more of each in the refrigerator; but, I figured I could obviously do without. 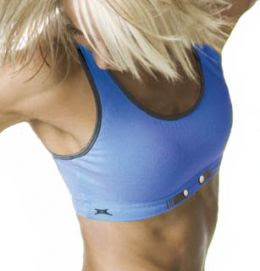 I went upstairs and got out some sweatpants and a sports bra. As I pulled the bra over my head, I realized the real workout was going to be getting this bra on. What the heck?! Maybe the bra had shrank. Maybe I was just a bit bigger than the last time I wore it. Whatever the issue, my breasts were smashed to pieces. My boobs, now resembling long pancakes after nursing three children were virtually non-existent in this bra. Really, it was a total nightmare getting it on; and, I will be going to the store tomorrow to get a new one (or two).

After getting dressed and pulling my hair into a neatly combed mommy-do (pony tail), I returned downstairs to rummage through my workout videos. I used to have several that I really enjoyed. I looked, and looked, and looked, and never found them. Seems they must have disappeared. Either that, or my husband saw them, figured it would be a cold day in hell before I ever used them again, and threw them out. I figure the answer is most likely the latter.


I decided that I really didn't need a video, I could use my free weights and do some calisthenics, for a change from the treadmill. Nicholas thought this was an absolutely fabulous idea, so he quickly picked up the smallest weights I had and wanted to join in the fun. I turned on some music, Jacob rocked out on his guitar, Lyla danced in her play gym, and Nick and I did jumping jacks, toe touches, flutter kicks, leg lifts and a bunch of others.


Overall, I believe our workout was a success. The fact that I made the time to do it was an accomplishment to begin with. Then, actually having some harmony and cooperation from the other two children while Nicholas and I exercised was really a small miracle. I think Nick really enjoyed himself too. What a bonus!

Thank God for miracles, for it's a new day again tomorrow.