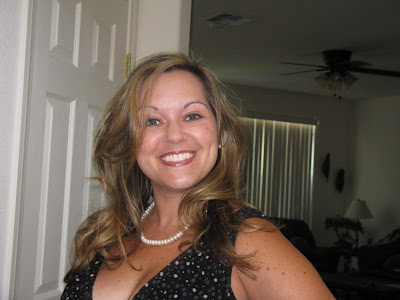 My husband, Rick and I had an awesome time on our outing Friday night. (Please refer to the picture of me above-taken before rushing out the door) As I previously mentioned, we never go out. So, it was quite a treat when we both got all dolled up for the big occasion. We arrived about 15 minutes early to our "Flash-Backs-To-The-Good-Ole-Days Extravaganza"- otherwise known as a promotion ceremony. Really, it was a big party for all of the Air Force personnel being inducted into the top three enlisted ranks. My husband was one of the inductees. Obviously, I was/am extremely proud. My husband has been awaiting this moment (not thinking it would ever happen) for the last twenty-two years. I was glad I could be there to share this with him. Also, it was nice to get a short-escape from the day-to-day stuff with the children and just be Crystall (and Rick's wife). 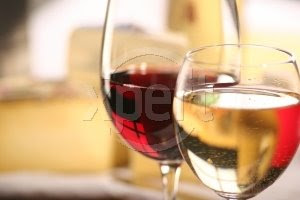 I had wine. It was cheap wine, but I didn't care. Probably pumped straight from a box behind the bar. It was pink, smooth and well....delicious! White Zinfandel, I think. About half-way through the glass, I was feeling the power! I knew I was a light-weight when it came to drinking- I rarely drink. But, I knew I better slow down and/or eat something or Rick may soon have to peel my sleeping body off of the floor. Not good. Just then, I was snapped out of my wine-induced fairyland when I noticed a long line of female admirers approaching. I attempted to stand up straight, not giving away my tipsiness. They were all smiling, starry-eyed. It was shoe envy. Although these three ladies actually approached me at different parts of the evening, my own surprise and astonishment (that I could actually have something worth another woman's shoe envy) and my fine-wine-fog spawned a fantasy of one jealous shoe-junkie after another aligned at my feet throughout the evening. Had I known my shoes were this awesome, I would be wearing them everywhere: the grocery store, the park, and the mailbox (all the fashionable places that I frequent).
Below you will see a picture of these fab shoes. For those of you who actually buy shoes that are more than twenty dollars- well, you may not think they are that great. But, for the other moms out there who have not had the extra money for designer anything since the coming of the children (or maybe never)....you'll probably love them as I do. AND.....they were bought for $17 at White House Black Market (great sale)! Who says beauty has to be expensive? I have to say that even if I could afford those designer shoes, I would probably still like these. 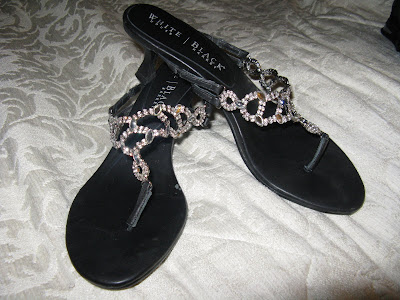 Also, for you other ladies (like me) who only frequent your home, the drug store, mailbox, park and grocery store, I wish for you to be, for once, the woman on the other end of shoe envy. In Nick's words, "That was SO COOL!!!"

That's a great price you paid for those shoes! They are so cute! And I love White House/Black Market. So pretty!
Congrats to your husband, that is awesome! You must be so proud! Glad you had fun!

Great shoes! They are very cute. And I love the price. Glad you had a nice time on Friday.