Today stunk. I am not a mother to pretend that all is just peachy in motherhood all of the time. It's tough and sometimes can seem that the challenges are endless and insurmountable. It is quite typical of the children to totally go nuts between 24 and 48 hours of my husband Rick's departure. That's what they do. Although I know their routine, I feel I am never really prepared for what is in store for me. 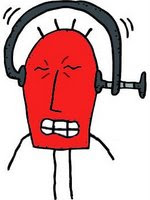 I think the children's behavior stems from their feelings of insecurity when Rick comes and goes so often. Nicholas is the primary driver of this train. He goes wild, which prompts Jacob to go wild, then I go crazy and then the Lyla jumps in. Before I know it, we are living in an insane asylum where I am the warden-a bit deranged and unhinged myself.


I realize that my husband is not often gone for long, extended trips; however, some part of me wonders if it would be easier on the children if he were. Once gone for a while, things settle and the house comes to order once again. But with my husband's unpredictable ins and outs, it is hard to get settled. Just when things get back to normal and start to run smoothly, he leaves (or returns) again.


I think that I would be fine with the boys being rowdy if it wasn't for the added strain of my functioning on about 2 hours of sleep per night for the last three days. Lyla has had some difficulty sleeping over the last week. I am hoping that it is a mere coincidence that her issues sleeping began the day after receiving her latest round of immunizations. She has been waking between four and seven times a night for the last week. It is steady getting worse; in the last few nights she has repeatedly been waking up screaming and unable to go back to sleep without some sort of intervention on my part.

Rick called earlier today to say Hi. After about three seconds of speaking to me, he knew I was not myself. After an hour of listening to me sobbing uncontrollably and blubbering without reason, I know he wanted to be home that instant. He reassured me and sternly told me to try and take a nap at the first opportunity I received. I really doubted that moment would arise, but I was all for the thought of a peaceful nap.

Miraculously, the planets and stars aligned for about ninety minutes this afternoon and I did get some rest. I awoke with a bit more patience, thankfully. With my renewed sense of strength, I had no difficulties showing Nicholas (the king of the children) exactly who was boss; so, the boys fell right back in line and behaved much more like gentlemen. As for Lyla, she is my angel. She looks to me for smiles. Thankfully, I was able to again give them.

Being a mom is tough especially with a traveling husbands like ours.. My kids have gotten used to it by now. they are 11 and 13.. but when they were younger..when's dad coming home..why does leave me...? I know many times I would just break down and cry..but I promise it does get better..

Thanks Kelly. You always have the nicest comments for me. :)

Crystall, I don't know how you do it. Seriously. And with not having slept much...

I have a tough enough time making it from 8-6 p.m. during the week, so I have great admiration for you being able to cope alone.

Amazing what 90 minutes of rest time can do for you though. Now if only we could make that happen 3 times a day...